You are here: Home / Conditions / The Food Insulin Index, PCOS and Metabolic Health 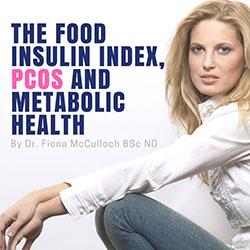 Polycystic Ovary Syndrome also known as PCOS affects an estimated 7 million women in the USA alone and is the most common hormonal condition in women. Although it’s always been thought of as a reproductive health concern, it’s actually a complex condition that not only affects a woman’s ability to ovulate or conceive, but has powerful effects on a woman’s metabolism and weight. It’s much harder to lose weight if you have PCOS, and also far easier to gain fat. Women with the condition tend to carry weight around their abdomen, and have increased risks for type two diabetes, obesity and cardiovascular disease — even after menopause.

The symptoms can vary from woman to woman, and its estimated that 50% of women with PCOS are unaware that they have it. In fact, many women don’t realize they have PCOS until they struggle to conceive – but the hallmark signs may have been present since childhood or adolescence.

PCOS is diagnosed if a woman has two out of three criteria:

One of the most central factors in PCOS is insulin resistance. Insulin resistance is associated with abdominal weight gain, appetite dysregulation, difficulty losing weight, and chronic health conditions like type two diabetes. It can also show up on the skin, causing dark, velvety pigmentation and skin tags.

Insulin is a storage hormone that is secreted in response to elevations in blood sugar after we eat. Insulin is a hormone which signals the cell to take up glucose from the blood and it also blocks the breakdown of fat, since directly after eating we have plenty of available energy to burn.

Insulin resistance occurs with weight gain, or when excess energy is provided to the cells long term. Overloaded fat cells spill fatty acids into the bloodstream which causes inflammation. In this environment of excess energy, the cells become resistant to insulin, as they are already flooded with glucose.  Women with PCOS develop insulin resistance far more easily than other women due to genetic factors.

With cells that no longer listen to the messages from insulin, the pancreas tries to compensate by making more insulin to keep blood sugar under control. The end result is that most women with PCOS have higher amounts of insulin after they eat, between meals, and even fasting at night. Typically, insulin levels should go down after meals but in insulin resistant people they spike higher, stay high for longer, and often never going down to a low baseline even while fasting.

As we’ve just learned, when we eat a meal, blood sugar rises and the pancreas responds by releasing insulin to store it away.

Although the glycemic index has long been helpful for managing diabetes, insulin resistance and PCOS it has certain limitations.

There is a new index, which may be more useful, particularly for PCOS where high insulin levels wreak havoc in the body. The insulin index tells us how much a consumed food raises insulin levels, rather than glucose levels. It includes a variety of foods including carbohydrates, proteins, fats and combinations. Most of the research on the insulin index has been conducted by the same researchers at the University of Sydney who developed much of our knowledge on the glycemic index.  As a result, evidence for the insulin index sits atop many years of intensive research in nutrition.

As mentioned, foods that rank high on the glycemic index are also high on the insulin index since insulin is released in response to increases in blood sugar.

Surprisingly however, some of the foods ranking highest on the insulin index are in fact very low on the glycemic index, and don’t raise blood sugar levels much at all.

Most people are surprised to learn that proteins provoke insulin release. In fact, one of the most insulin spiking of all are the branched-chain amino acids found in dairy protein. These amino acids have the ability to enter the bloodstream rapidly and cause a surge of insulin release.

As an example, 1 cup of low fat fruit yogurt provokes more insulin release than two slices of white bread!  Each protein rich food has different insulinemic properties, for example beef increases insulin levels more than chicken, and whey protein powder is one of the highest foods on the insulin index.  Protein does however have benefits for our metabolism and should not be viewed as inherently bad – consumption of protein is associated with weight loss, and increased satiety.

The insulin index tells us how much insulin will be released when we consume 239 calories of a food. The food insulin demand (FID), a related index, is a points based system representing the amount of insulin that we release after eating a certain quantity of food – an exceptionally useful tool we can use to plan meals.

Insulin counts of a few commonly consumed foods, healthy and otherwise, in the Standard American Diet. 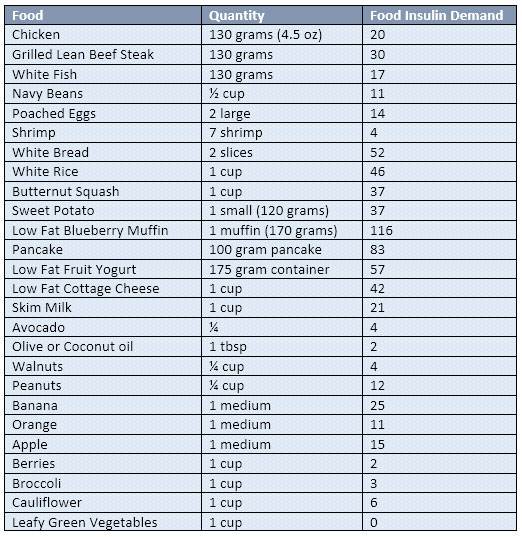 Rather than avoiding all foods that rank high on the food insulin demand, it’s far more helpful to structure a meal based on understanding the effects of food on our metabolism, particularly if a woman is already insulin resistant. Keeping insulin levels in check can help the cells to become more sensitive to this important hormone and help recreate normal post-meal insulin responses with appropriate lowering of insulin at fasting and between meals.

An optimal meal structure involves choosing a protein, healthy fat, and vegetables for each meal, with a lower insulin demand carbohydrate depending on the level of insulin resistance.

An example of a meal structure for a woman with insulin resistance.

The insulin resistance and inflammation in PCOS affect every aspect of health from ovulation and fertility to the lifelong risks for obesity, type two diabetes, and cardiovascular disease. Understanding the effects of nutrition on metabolism can improve health for the many women with PCOS throughout their entire lifespan.

Is There a Connection Between PCOS & Foot Pain?
What is PCOS? The Syndrome that affects 7 million women in the United States
Polycystic Ovarian Syndrome (PCOS) and it Relationship to Endometrial Cancer: What is important to k...

Fiona McCulloch, N.D., author of 8 Steps to Reverse Your PCOS and founder and owner of White Lotus Integrated Medicine, is a naturopath practitioner having worked with thousands of people seeking better health over the past fifteen years. She is a data-junkie who specializes in evidence-based therapies for PCOS, thyroid health, autoimmunity, weight management and infertility among other unique conditions that can all benefit from a system reboot. Dr. McCulloch is also a medical advisor for IVF.ca: Canada’s premier fertility community and is on the medical advisory committee for the PCOS Awareness Association. As a woman with PCOS herself, she is dedicated to increasing both awareness and research of this important condition that has far reaching effects on the lives of so many women. When she was a young girl, Dr. McCulloch would spend hours “compounding” mixtures made from plants and trees in the woods near her house.  Today, Dr. McCulloch is a graduate of the Canadian College of Naturopathic Medicine (2001) and the University of Guelph (biological science).  She is married and the mother of three boys.  She can be reached on Facebook and LinkedIn.