You are here: Home / Archives for Social Anxiety Disorder

Social anxiety disorder is more common than we may think and it shows itself in more ways than meets the eye. Through the following examples I’m going to take you on a timeline back to a couple of origins of social anxiety.

Let’s start with Nicole, a 36-year-old female. On the outside she looks well put together, has a career, went to great schools and is about to get married. When colleagues see her, she always smiles, is noted to be kind and polite and very caring. No one would think she has social anxiety. However, when taking a closer look at Nicole, she seems to be a little shy in group setting, with a slight nervous laughter and hesitant to answer when spoken to. She prefers to blend into the background and is afraid to contribute to a group conversation. When someone talks to her directly she tends to choke up and have a hard time responding to the question or comment. Her opinion shifts constantly to be agreeable and lacks a personal opinion on most topics. The very few people close to Nicole, realize she has an addition problem. She wakes up and smokes marijuana just to be able to make it through the day and to be around people. At night and weekends when she is in social circles, she tends to have too many drinks and will get drunk to the point of black outs. After working with Nicole for several months it became clear that she is so afraid to be in social groups that she learned to cope with her extreme anxiety by numbing herself with substances.

Now let’s go further back in time with Nicolas. Nicolas is 19-years-old. He just graduated from high school and is going to college. Nicolas had to get his first job and has just started driving and gaining adult responsibilities. Nicolas had an awful hard time adjusting to all the responsibilities of adulthood and has needed extra help and support to get started in this stage of his life. Nicolas doesn’t really get close to too many people and self-reports himself as being “socially awkward.” When further looking at his personal definition of himself, he says, “I don’t know how to talk to people I don’t know. It’s hard for me to greet the cashiers or waiters/waitresses. I’m afraid I’ll come across weird or stupid so I just don’t say anything at all.” Nicolas copes with his anxiety by hiding behind his computer and engaging in the gaming world instead of hanging out with his friends and going to social gatherings. Nicolas feels safe in his virtual world where he can create a virtual image of himself and feed his fantasy. Nicolas copes by masking himself and hiding himself in his imagination and virtual reality.

Now let us go back even further in time with Sarah. Sarah is 11-years old. She has moved a lot. Her parents argue all the time, she has a hard time sleeping and she feels panic attacks all the time. Sarah’s mom is concerned because Sarah has a hard time making friends and is always stressed out. Sarah hasn’t really developed any coping skills for her social anxiety so it shows itself in a more raw form than her older counterparts. In sessions, Sarah talks about how she feels and says the only way she can deal with her feelings is to try to ignore them, which is a hard thing to do sometimes. She says it’s so hard for her to make friends and she starts crying. She doesn’t know why it’s so hard and feels there is something wrong with her. When she thinks about her life, she is always worried and thinks something really bad is going to happen. Sarah is longing for some predictability and peace. For Sarah, it’s hard to get close to people, because she doesn’t know how long she will know them or how they will react to her. She is emotionally fragile and consumed by instability. She is in the beginning stages of developing social anxiety.

To understand yet another root of social anxiety  we’ll go even further back with Scott. Scott is 7-years-old. Scott is considered to be very hyperactive, the children don’t like playing with him and he seems to have a hard time making any friends. Scott doesn’t know why the other children don’t like him or why the teacher always picks on him to follow the rules in class. At first glance many would think Scott may have ADHD, which is grossly misdiagnosed with youth these days. Scott really wants to be social and outgoing and really wants to make friends and do well in class, however, he keeps getting the message that there is something wrong with him or he is doing something wrong. Scott’s parents are overly critical and always give “negative attention” as in, always tell him how he is doing something wrong. This message keeps extending into his social life in school and on the playground. Scott starts developing a belief system about himself of “there is something wrong with me and always do something wrong.” This starts making Scott feel like he is not accepted. The seeds of social anxiety are being planted in Scott.

Social anxiety disorder is not uncommon; research suggests that about 7 percent of Americans are affected.

Other Resources for Social Anxiety Disorder 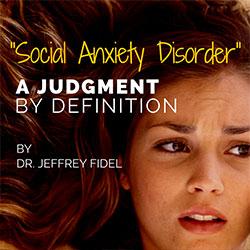 When we are born, we come into the world, not as our thoughts or belief systems within our minds, but as our intrinsic existence as complete beings.  Our minds (which resides within our being) start off as a “blank slate” with not even a single acquired thought or belief system.  As our minds become exposed to stimuli (including language) via our senses from the external world, they begin to acquire and store this information.  Over time, our minds begin to form belief systems which is very much dependent on the environment of where we grow up.

At the core of a human being is the need for acceptance from the world around which all beings are a part of.  As early as infants, we have the innate ability to cry as a means of gaining the attention, acceptance and affection of our caregivers.  If a child is repeatedly ignored or verbally or physically reprimanded for behavior judged as “not in accordance with” or “not up to standards of”  the rules and expectations of society, their mind’s will perceive rejection.

If the developing child’s mind perceives being repeatedly ignored, judged or rejected, they may resort to physical behaviors such as yelling, hitting or acting out in some way in order to gain attention from society in their quest for acceptance.  Certain members of society may be intolerant to this acting out behavior of the child and react with verbal threats and/or physical punishment.  These members of society (those administering the verbal judgements and/or physical punishments) likely learned their own belief/behavior system from their parents when it was enforced upon them to “fit into” to society when they themselves were growing up.

If a child’s “acting out” behavior is continually punished, over time, the child’s mind will learn to repress its body (being) from “acting out”.  The child’s mind may instruct its “being” to stop talking, crying or “throwing tantrums” since these behaviors are at risk to be verbally and/or physically punished by the society around them.  The child will gradually modify both their thoughts and behaviors in an attempt to “fit into” society.

Since their minds are now acquiring a perception that they are in continuous judgement from the outside world, and if they act out on their thoughts, they will be punished, they will eventually choose an avoidant behavior to keep their “being” safe from their mind’s perceived threat from society.  Since many of these mind/behavior patterns are formed very early in childhood, they are embedded deep within the subconscious portion of the mind of the individual (Including the treating mental health professionals.)

As verbal language is acquired within the mind of the individual, verbal thoughts begin to accompany their mind’s perceived threat from the outside world.  Some of these thoughts may be rather disturbing to the individual and may include violent thoughts such as “wishing harm” upon others.  The developing mind of the affected individual will be reluctant to share their disturbing or violent thoughts “out loud” with others (mental health professionals included) secondary to a fear that telling another person may lead to further punishment by society.  It is indeed true that the divulgence of their thoughts to society carries real risks to the individual such as medication, institutionalization or just a general perceived mistrust by the belief systems stored within the collective minds of the society that surrounds them.  If the individual verbally expresses themselves (divulges their thoughts “out loud”), they run the risk of being subjected to further judgement by the mind’s of others (health providers included), e.g. “That person is crazy”; “That person is a killer”; “That person has a mental disorder”; etc…

The mind of the individual therefore keeps its being (mind and body) in a state of repression since the human being has learned from past experience that acting out or voicing their opinions will result in punishment.  They therefore will likely continue to hold onto their thought processes and avoidant behavior.

The thought processes (both auditory and visual) eventually become more cyclical, to the point where the individual’s mind can no longer escape the “disturbing” thoughts (for example, a thought of wishing harm upon another.)  At the same time, an inner conflict will persist in their mind that if they harm another, they will be punished by society.

This perpetual thought cycle will have an effect on the complete human being since their mind has now created a constant internal state of perceived threat that will keep the entire body in a state of fear thus resulting in diffuse sympathetic overdrive.  The sympathetic overdrive will lead to physical symptoms throughout the being of the individual such as sweating, blushing, trembling, gastrointestinal disturbances, etc.

An effective therapy for the state of mind “Social anxiety disorder” may be to teach the act of “internal forgiveness” which will allow the suffering individual’s mind to begin to break the chain of the offending internal cyclical thought process.  It may be taught that holding onto and responding to disturbing or violent thoughts will only result in endless self-induced suffering. These cyclical thought patterns (that persist with or without a “real” threat from the outside world) create a persistent state of sympathetic overdrive that has an effect throughout the entire being (mind and body) of the individual.

These acts of “internal forgiveness” and “internal feeling” address the core etiology of the acquired state of mind labeled “Social anxiety disorder.”  If treatment avoids the core etiology, these individuals will likely remain in their own thought cycle/sympathetic overdrive state. They will remain trapped in their own mental perception of being surrounded by a threatening society, and will therefore likely continue to employ avoidant behavior and/or take drugs to numb their mind.

As health care providers, we can serve as a guide so that the individual’s may safely conduct their own “inner healing” in an accepting and understanding environment.

In the end, no matter what scientists decide to label a state of mind, it is the individual’s identification with and their response to their own thoughts that cause their suffering. The choice is ultimately up to the suffering individual to perform their own “internal forgiveness” and “internal feeling.”  As health providers, we can assist suffering individuals to commence their own journey of “inner healing” which occurs both inside and outside of the confines of the thinking mind.