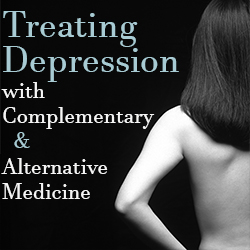 According to the National Institute of Mental Health, 6.7% of U.S adults experience major depressive disorder each year. Symptoms range from feelings of anxiety and sadness to aches and pains, headaches and trouble sleeping.  Recently, the suicide of beloved actor Robin Williams has brought the subject up depression to the forefront. While antidepressants and prescription drugs may help to alleviate symptoms, more and more doctors are coupling with talk therapy and other alternative treatments. Here are a few treatments that may be effective:

1. Acupuncture: As a therapy, acupuncture has been found to be very effective for treating depression. It’s been shown in FMRI studies to affect the hypothalamus pituitary adrenal axis in the brain, which in turn controls the limbic system, a part of the brain that deals with emotions. When this happens, serotonin and endorphins, considered to be ‘feel-good’ chemicals are released by the brain. The sympathetic nervous system or the “fight or flight response” is calmed down. Of course, a practitioner will always tailor the treatments to a patient’s specific needs. When performed regularly, acupuncture can have a real impact on easing the effects of depression.

2. Yoga and Tai Chi: The benefits of exercise especially as a treatment for depression have been widely documented, but its not just high-intensity workouts that do the trick. Consider slowing down with the ancient practices of yoga and Tai Chi Chuan (also known as Tai Chi). These practices combine soft, gentle movements with diaphragmatic breathing to help achieve relaxation. And the benefits don’t stop there!  Recent research has confirmed that these practices can improve mood, lower blood pressure, improve heart function, reduce pain, relieve fibromyalgia symptoms, and improve balance.

3. Herbal Medicine: The use of pharmaceutical drugs to control depression can at times have very powerful negative side effects such as headaches, nausea, jitters, insomnia and addiction. If you’re wary of prescription drugs, opt instead for Traditional Chinese herbal formulas, which have been used for centuries for combating anxiety, stress, and depression. Some of the herbs in the most common formulas for depression are milkwort root, the root of a beliflower called codonopsis pilosula, Japanese sweetflag, bupleurum or thorowax root, ziziphus or Chinese dates, bitter orange, Chinese cedar seeds, lophatherum ( a type of bamboo), and tumeric. A good herbal practitioner will create a special formula or combination of formulas for each patient’s special needs.

These simple Eastern remedies can have a real impact on the management of depression and anxiety, taking you from stressed to soothed in no time. And remember, if this becomes too much to manage, you are not alone, turn to a professional for help.