You are here: Home / Mental Health / Alphabet Soup in Psychology: BPD and DBT 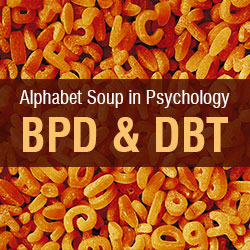 There are so many acronyms in the fast-passed world we live in; welcome to the American culture of ‘living to work.’ We are often looking for the quick fix and that is where I place the blame of the all the acronyms that are a part of our society. Some that you will read about in this article include: BPD, CBT and DBT. Borderline Personality Disorder (BPD) has consistently been found to be the most common of all personality disorders with estimates ranging from 1% to 2% of the general population, and some have suggested that BPD can be as high as 6% (Rizvi, Steffel, & Carson-Wong, 2012; Zanarini, 2012). I also believe that it is one of those highly misdiagnosed disorders, right up there with Bipolar disorder and ADHD (another acronym I forgot to mention above). In fact, one known fact in the psychology literature is that men are under diagnosed with BPD while women are over diagnosed.

Now, before you go diagnosing yourself or a loved one, please note that we all can notice signs of any mental illness in ourselves or a loved one (or hated one). BPD includes fears of abandonment (real or not so real), unstable relationships (family and friends), identity difficulties (body image and self esteem issues), impulsive (high risk behaviors like sex, drugs…), suicidal acts (some with intent to die, most for attention), mood changes quickly (love you one minute, hate you the next), chronically feeling empty, and uncontrollable anger. It has to be more than just meeting the checklist as determined by American psychiatrists (See: DSM.5; note the rest of the world uses the ICD-10), rather it requires the assessment, evaluation, and diagnosis from a professional who has had training and clinical experience with individuals with BPD (more than a 3-4 year Masters degree). Let me remind you, as I did with the medical students I would teach, we have all felt pieces, or know someone who has, of the aforementioned symptoms- that does not makes us BPD.

The good news is that many people with BPD have shown to have less symptoms as they mature (Chafos & Economou, 2014).  As clients with BPD approaches later adulthood, the symptoms of BPD decrease (Kreisman & Strauss, 2010). Kreisman and his colleagues (2010) believed that the decrease in symptoms was due to the client with BPD maturing or learning how to better cope with the symptoms. This is true as we learn more in the field of psychology; that is, we learn what works best for which symptoms (i.e., evidenced-based treatments). Dialectical behavioral therapy (DBT) developed by Marsha Lineman (Linehan, 1993) is a program to treat some of the most challenging symptoms. (i.e., Marsha came out in a New York Times article in January 2011 about her own battle with BPD). In short, DBT teaches clients Mindfulness, Distress Tolerance, Emotion Regulations and Interpersonal Effectiveness.

Another study found that approximately 86% of clients with BPD achieved sustained relief of their symptoms for over 10 years, while half of those achieved sustained relief within the first two years (Kreisman & Strauss, 2010). The important note here is, as with anything worth while, evidenced-based treatment such as DBT takes effort and work. As such, clients entering into a DBT treatment program must meet specific criteria and commit to staying alive while in treatment.

Katsakou, Marougka, Barnicot, Savill, White, Lockwood, and Priebe (2012) found evidence that confirmed just under 50% of patients who originally met criteria of BPD, no longer met criteria six years later, and after 10 years only 26% of patients met the criteria.  Paris (2009) found that by the age of 50, 90 % of clients with BPD will improve or recover, and no longer meet criteria for BPD. After treatments, such as DBT, clients with BPD appeared more capable to engage in healthy relationships, were less impulsive, and had a more stable mood (Baerentsen, Hartvig, Stodlilde-Jorgensen, & Mammen, 2001; Bedics, Atkins, Comtois, & Linehan, 2012; Brambilla, Soloff ; Katsakou et al., 2012).

Is DBT the only answer? Not necessarily but it really works for a lot of people so it should be the first line of defense. DBT is part of the cognitive therapy umbrella which includes many acronyms, however, note that the most common and other very effective treatment is cognitive behavioral therapy (CBT). CBT, mostly attributed to Aaron Beck, is an evidenced-based treatment, and examines one’s thoughts and links those thoughts to one’s behaviors. Thoughts re often judged as functional (e.g., that lion has not eating in days and is 5 feet away with no fence- you’re not at a zoo) or dysfunctional (e.g., the plane is dangerous- your bed is more dangerous folks). CBT came first (i.e., before DBT) and is related to DBT; I often refer to them as cousins. So the sliver lining here is that BPD, which was once thought of as one of the most difficult personality disorders to treat, is very treatable. There is hope for those living with BPD as well as hope for their families who are also greatly affected by the disorder.

Dr. Pete is cognitive and behavioral psychologist who is licensed to practice in NJ and NY. He is also an associate professor of counseling psychology in a graduate program at Felician College. The founder of a CBT practice in NJ, humanitarian having completed several international relief projects, researcher presenting on various topics across the country, Dr. Pete is constantly challenging himself to learn more and share his findings. Dr. Pete is a Zen practitioner and specializes in the third wave CBT techniques.  www.felician.edu