You are here: Home / Archives for Anish Majumdar

Anish Majumdar (anishmajumdar.com) is an author, journalist and speaker interested in breaking down the wall of silence that surrounds mental illness. His first novel  The Isolation Door, which is based on his experiences growing up with a schizophrenic parent and creating a life beyond its shadow, is now available. 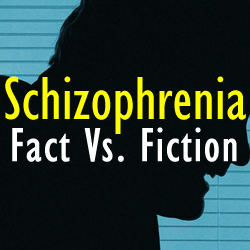 Few illnesses are as steeped in fear and misunderstanding in today’s culture as schizophrenia. A severe and disabling brain disorder affecting 1% of the U.S. population, it typically occurs in the late teens to early 20s for men and mid 20s to early 30s for women. As a child growing up with a schizophrenic mother, I learned firsthand about the terrifying personality changes the disease can bring about in a loved one, and the sacrifices that must be made by not only the ill person but their entire family in coping with something that can, at best, be controlled, not cured. I also witnessed the enormous gap between the reality of the disease and how it’s perceived by others.

Here are some of the biggest misconceptions people have about schizophrenia:

Fact: While the behavior of a schizophrenic in the grip of a psychotic episode—expounding on bizarre beliefs, talking in a strange way, and responding to auditory and visual hallucinations—can seem like the manifestation of a new personality, the root consciousness of the individual never actually goes away. During the course of one episode preceding a forced hospitalization, my mother dressed in all black clothing, muttered incantations in what seemed like a foreign language, and refused to answer to any name but Dorothy (which is not her real name). However, in stark contrast to a person with multiple personality disorder, this was at heart an act performed by my mother, a desperate response to a set of very real beliefs and warped sensory input. It’s an important distinction: no matter how extreme the situation, there’s always a chance to reach the person underneath.

Fact: Schizophrenics are generally classified into one of several subtypes, such as Paranoid Schizophrenia (the most common subtype), Catatonic Schizophrenia, and Residual Schizophrenia, which is diagnosed when a patient no longer displays prominent symptoms. Due to the mercurial nature of the disorder, it is not uncommon for patients to be re-classified into different subtypes throughout the course of their lives. Furthermore, there is growing controversy within the psychiatric community and general public about whether the wide range of symptoms that fall under the purview of schizophrenia can even be classified as a single disorder. What’s not in doubt is that every individual suffering from the illness requires a specialized treatment plan tailored to his/her symptoms and life situation.

Fiction: All Schizophrenics Know That They Have An Illness

Fact: While the outward symptoms of schizophrenia often leave little doubt as to the severity of the illness, one of the major hallmarks of the disease is the fact that those affected can sometimes go months, and even years before realizing they’re ill. For over a decade following the onset of my mother’s schizophrenia, a period during which she was repeatedly hospitalized for psychotic episodes and received extensive medical treatment, delusional thinking kept her convinced that she was perfectly healthy and everything else was an elaborate conspiracy. Lasting improvements in her state of mind only occurred after a doctor found an effective combination of medications that, together with regular therapy sessions, finally allowed her to come to terms with the reality of her illness.

Fact: People with schizophrenia are no more predisposed to violence than any other group. However, particular symptoms of the disorder, such as delusions of persecution, can trigger violent acts if left untreated. Lost in the headlines that these acts generate is the fact that the vast majority of cases involving violence with a schizophrenic are self-directed. According to the National Institute of Mental Health (NIMH), approximately 10% of people diagnosed with schizophrenia will die by suicide.

Fiction: Isolation is the Only Way to Handle Schizophrenia

Fact: According to a recent World Health Organization study, schizophrenics in developing nations like India, which tend to have a much stronger sense of community and shared responsibility when it comes to caring for the mentally ill, showed significantly higher rates of recovery than in the United States and England. Some of the key differences include access to low-stress jobs and close involvement by families during doctor-patient discussions, whereas in the West the mentally ill are typically excluded from the workplace and doctor-patient conversations are kept strictly confidential. It points to the enormous role social factors play in the recovery of schizophrenics, as well as the potential to improve their lives through adopting a new, community-based approach.