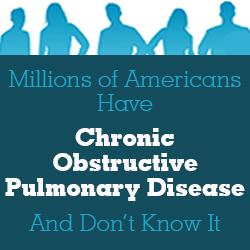 People with COPD can have a range of symptoms, including cough, wheeze, sputum production and breathlessness. Many people mistake their increased breathlessness and coughing as a normal part of aging.

COPD affects over 24 million Americans. The National Heart, Lung and Blood Institute estimates that 12 million adults have COPD and another 12 million are undiagnosed or developing COPD. COPD is the third leading cause of death in the United States, killing more women than men each year. Every four minutes an individual dies of COPD.

How is COPD diagnosed?

A physician diagnoses COPD based on signs and symptoms, an assessment of smoking habits and/or contact with lung irritants, medical and family histories, and lung function tests, including spirometry, a painless test that involves blowing into a tube connected to a small machine.

Bronchodilator Reversibility is also performed once on a patient in order to exclude asthma and to establish the best lung function for the individual patient. In addition, a chest radiography can help eliminate the possibility of other diseases, such as pneumonia, cancer and congestive heart failure.

Cigarette smoking is the main cause of COPD (75 percent of all COPD-related deaths are attributable to cigarette smoking), although air pollution and occupational dusts are also common causes of the disease. About two to three percent of individuals have a genetic form of COPD called Alpha-1 Antitrypsin (ATT) Deficiency.

How is COPD treated?

There are treatments available that can improve a patient’s quality of life, such as medication, vaccination, pulmonary rehabilitation, oxygen therapy and surgery. These therapies are used to help the patient relieve symptoms, reduce the frequency and severity of exacerbations, and improve overall health and ability to exercise.

Stopping smoking is the only proven method that slows the rapid rate of lung function decline. Smoking cessation is the only intervention that will reduce the progression of COPD.[i]

For those who have trouble quitting, they should talk with their doctor about programs and products that can help, and consider joining a support group. Many hospitals, workplaces, and community groups offer classes to help people quit smoking.

It’s also important to avoid secondhand smoke and places with dust, fumes, or other toxic substances that can be inhaled. Proper diet is also important for those living with COPD, and should involve eating smaller, more frequent meals, resting before eating and taking vitamins or nutritional supplements.

Comprehensive pulmonary rehabilitation, including exercise, strength training, multiple education components, effective COPD self-management, and nutritional advice, have all been shown to improve quality of life and to reduce exacerbations and hospitalizations in individuals with COPD. For optimal management of COPD, a combination of these strategies and a multidisciplinary team approach involving physicians, respiratory therapists, nurses and other healthcare professionals is essential.

For those with severe COPD and low levels of oxygen in their blood, oxygen therapy can help them breathe better. For this treatment, oxygen is give through nasal prongs or a mask. For some people who have severe COPD, using extra oxygen for most of the day can help them:

Lung damage from COPD is irreversible, and the quality of life for a person suffering from COPD diminishes as the disease progresses. While COPD is currently incurable, it is still treatable. Individuals of every race and culture should take steps to help maintain a good quality of life by contacting a physician to determine a diagnosis, learn more about the disease and develop the best strategies for care.

When a diagnosis is made in the early stages of COPD, and properly treated, the prognosis for the individual is improved and the rate of lung decline can be significantly slowed – making prevention and early diagnosis critical for quality of

[i] Anthonisen NR, Connett JE, Kiley JP. Et al. Effects of smoking intervention and the use of an inhaled anticholinergic bronchodilator on the rate of decline of FEV1. The Lung Health Study. JAMA 1994. 2721497-1505.